The decision came down to just 34 votes. with Fulfer winning 2,032 to Parks’ 1,998 votes. Conventional wisdom would say this race shouldn’t have been that close. The district voted 57% for Trump in 2020. The last contested general election (2012) saw the Republican win with 65% of the votes over a Democrat. 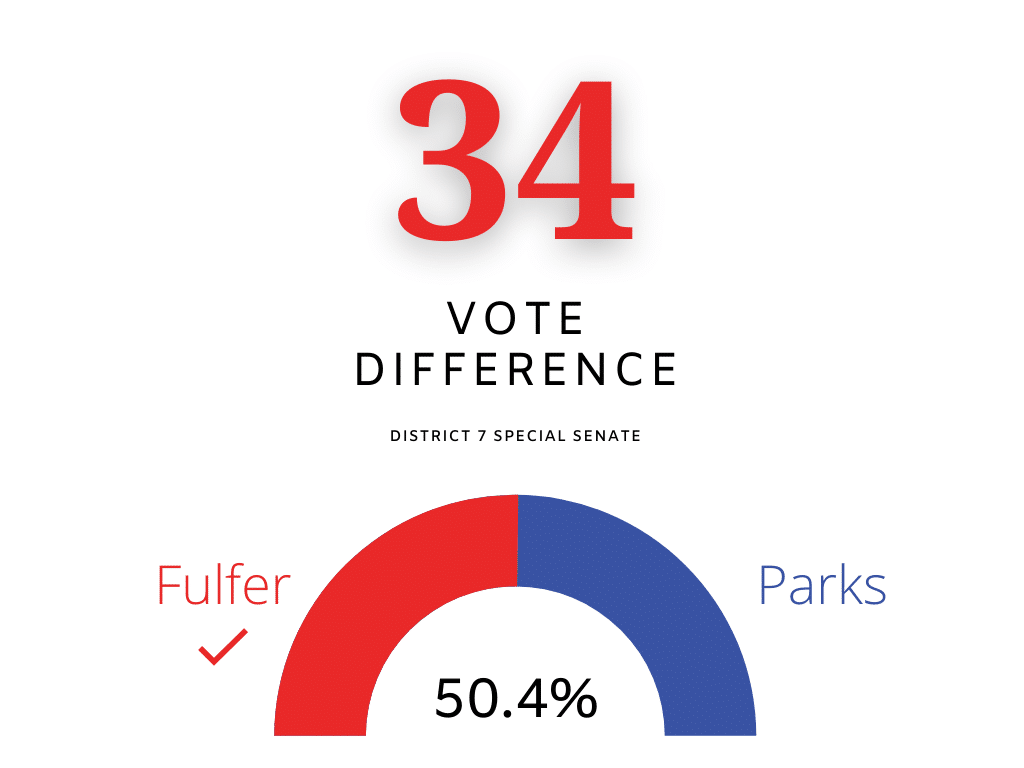 Before I dive into the results, let’s talk about some of the things that were at play in this race.

First, it was a special election in February during frigid weather. Special elections are notoriously unpredictable even in the best of circumstances. It’s all about driving turnout, as you can’t rely on other races to draw your party’s voters to the ballot box for you. It’s about candidate motivation, work and volunteer hours, and money spent. Existing voter dynamics don’t matter as much as they do in a regular general election.

2. Parks had a fundraising / opposition edge

Parks pulled in more fundraising dollars than Fulfer, at least according to the candidates’ latest contribution reports to the Secretary of State. Parks raised just shy of $75,000, while Fulfer had $33,750 in contributions and a $20,000 loan. And that extra cash Parks had? She could save it all for the general election, as she didn’t have a serious primary opponent. Fulfer, on the other hand, ran in a four-person primary that included Jim Bob Duggar throwing money around. He then faced a very close primary runoff against Steve Unger. So while Parks could keep her powder dry for the general, Fulfer had to run 2 races and prepare for a third.

That was obvious as it came time for the general election. From mailers to canvassers, activity from Parks’ camp was more active than Fulfer’s camp. Fulfer went practically radio silent after the primary runoff, resting on the numerical advantage that Republicans have in the district. That strategy worked for him. But just barely.

There we three election results in this special cycle:

Voter turnout was low across the board, as is unfortunately common in special elections. The general drew just under 9% of the district’s registered voters. Interestingly, there wasn’t a huge gap between turnout in the primary (3,834 votes) and the general (4,030 votes).

That could be the Duggar effect. It’s possible that voters in this district – Democrats, Republicans, Independents – REALLY didn’t want Jim Bob Duggar to be their Senator. This vote loss in especially interesting when you see that Parks gained more than 1,000 voters between the primary and the general– the exact opposite of what happened with Fulfer. You can see the breakdown in the charts below.

If we look at the Republican primary runoff election, it’s somewhere in between, as one might expect. There were 1,729 votes cast in the runoff, about 300 votes shy of the total votes Fulfer got in the general. 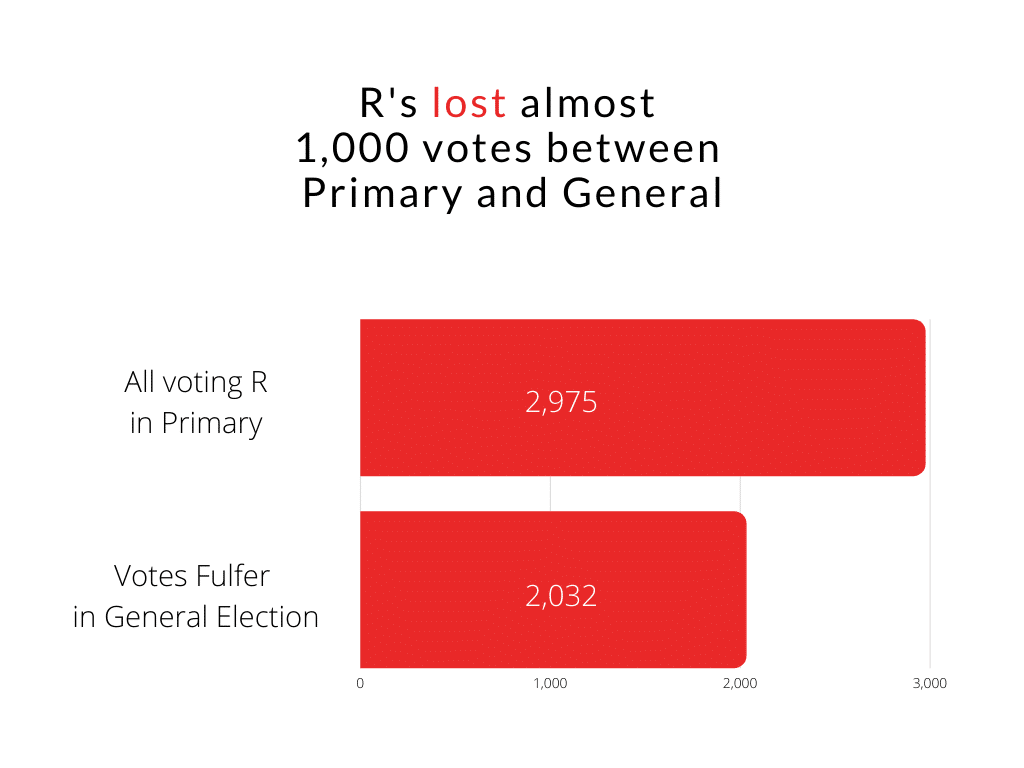 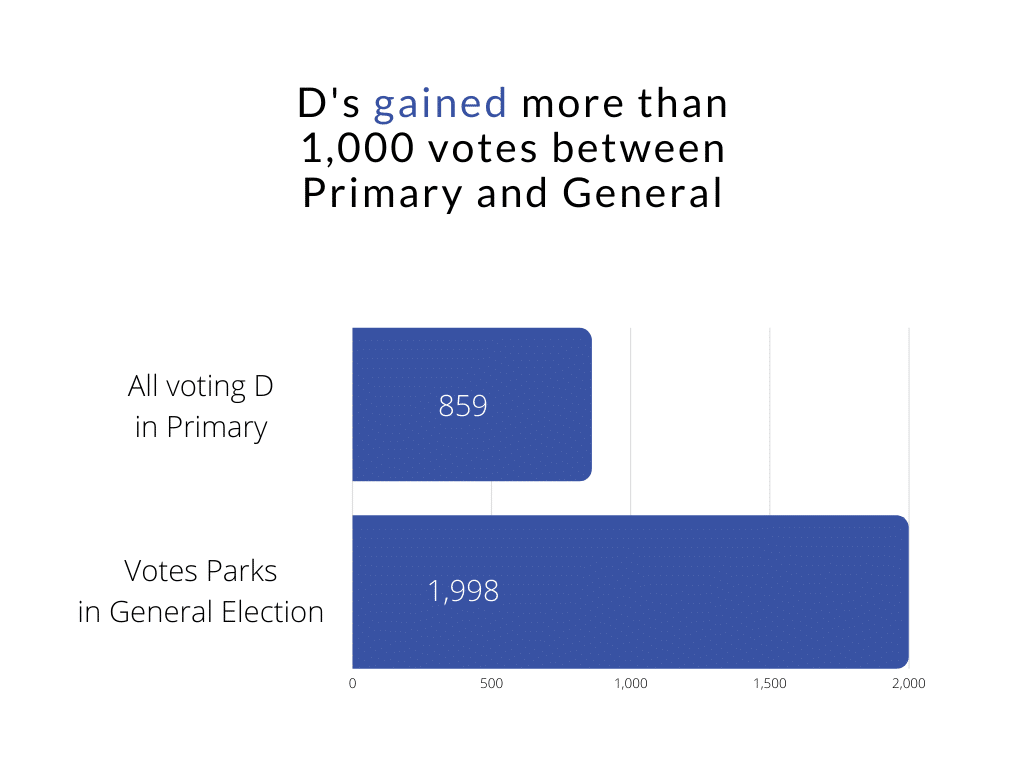 Finally, let’s take a look at where Fulfer and Parks performed well in the Feb. 8 race. In general, Parks outperformed Fulfer in the eastern and Fayetteville portions of the district, and Fulfer did better in Springdale. Here’s why that geography is important. We all know that the legislative districts were redrawn, and those new lines take effect in the next election cycle – i.e., for anyone who runs in the May and November elections. 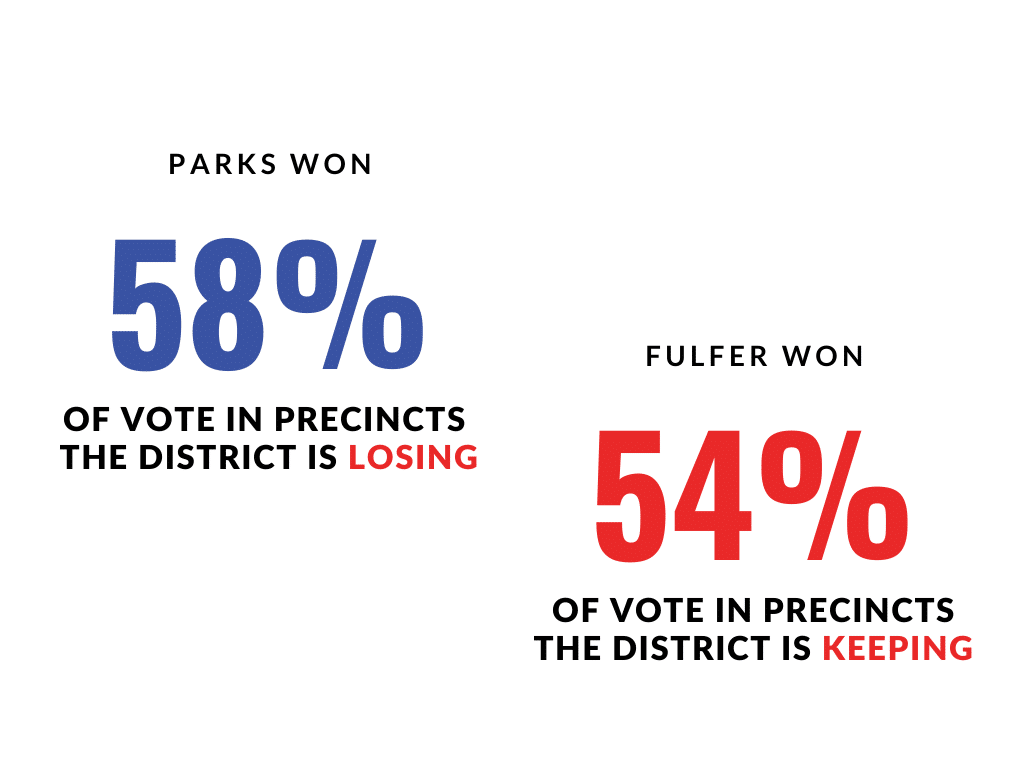 For example, Parks won precinct Prairie 1 in northeast Fayetteville with 57% of the vote. That precinct had the most votes cast in this election. However, it’s out of the district in the next election cycle. Fulfer won the precinct with the second highest number of votes cast with 66% of the vote, and it will remain the district. While not all precincts break down this cleanly, that’s a microcosm of what we’re looking at in the next cycle.

You can see more details on the geography below.

Looking ahead, Parks has announced she intends to run again this year in the regular election for the seat. Rep. Clint Penzo has announced for the seat, and rumblings of additional Republican candidates continue. Fulfer, who will be sworn in at the end of this week, has indicated he doesn’t plan to run for re-election. That could absolutely change if he gets comfortable in Little Rock, however.

My final takeaway: A clear-headed look indicates that, for all the reasons listed above, the tight margins of the race aren’t likely a harbinger of what we will see in November. It’s definitely a morale boost to Democrats who are looking for silver linings, despite the fact that it’s still a loss. For Republicans, it could serve as a reality check that, even though they may have the numerical advantage, that can’t be relied on in a well-challenged election– particularly a special election.